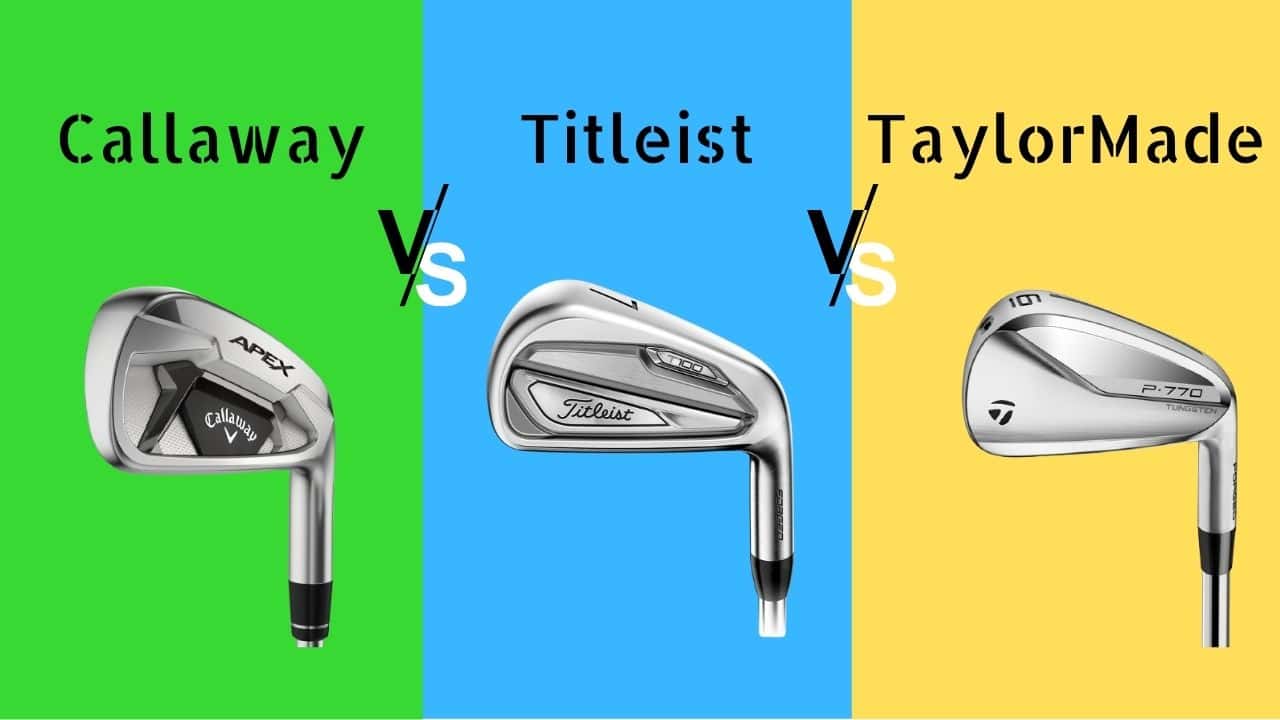 When it comes to golf irons that have a solid name and reputation, then you are going to end up trying to choose between Callaway, Titleist and TaylorMade. Now, they aren’t the only brands out there, of course, but it’s certainly the case that they are three of the best.

But that then opens up a pretty cool question, who makes the best golf irons out of those three companies?

That’s a tough one to answer, but it’s something we are going to attempt to deal with right now. After all, it kind of feels like being asked which one of your three kids is your favorite. It’s just a tough call and there are so many issues to think about.

So, to answer this, we need to look at several key areas in order to come to some sort of a conclusion.

Look Beyond the Names

But first, a word of caution. You cannot allow yourself to be blinded by the names. Take the Callaway Mavrik irons and the TaylorMade M6 irons.

They will put across that they are different at what they offer, but at the end of the day they both focus on adding distance to your shots, and also being extremely forgiving. So, for various prices, you will basically get the same end results.

What you need to do is to look more closely at what the different clubs offer, and here are some examples of what to focus on.

These three brands are all known for their innovation and introducing new technology to their irons. It’s tough to separate the three as they will often come up with the same sort of technology and aid on their clubs only to call them by slightly different names.

To be honest, when it comes to the technology side of things, then both Callway and TaylorMade are out in front compared to Titleist. However, don’t think that this then means Titleist produces poorer quality irons as that’s not the case.

Skill level is an interesting point here as people have a tendency to think that Callaway will only deal with low handicap players as they are a well established name.

To be honest, all three brands are producing irons to cover every single level of player. The Callaway Mavrik set mentioned earlier is a good example of how the company has brought out irons that are very forgiving, which is ideal for the high handicapper.

So, for the skill level part, this is pretty even as they all cover each base. Basically, you should be able to get a set of irons from each name for your own individual needs.

But let’s look more closely at each brand to see what they can offer before coming to our conclusion at the end.

Callaway irons can be pretty expensive, but that’s not always the case. Actually, there are some bargains out there, but they do tend to have less technology.

However, less technology can be a good thing for high handicap players.

Take a look at the Callaway Apex irons set. This really came to the fore starting in 2019, and it follows older models of Callaway irons where it covers such a wide range of abilities. The Apex set is lightweight as well, so if you have a slow swing speed, then these irons will help you out.

Sticking with the Apex set, they are also made from carbon steel. This makes them exceptionally lightweight, and the outcome is you swing it faster, but don’t think that the clubs would be flimsy in any way. That is just simply not true.

Instead, what you get here consistently from Callaway are irons that are sturdy with stiff flex and built-in technology that is going to reduce the vibrations you feel. That alone is going to help when it comes to getting some feedback from your shots.

Who are Callaway Irons for?

Callaway irons cover every base, but as with the other two names, you need to know what you are looking for. Irons such as the Apex series can be a good example.

What they have been able to do with the Apex series is to cover so many bases at the one time. That makes life easier and you simply need to be aware of the different technology across the range to see how it fits in with your game.

Callaway certainly has a number of pros and cons linked to their irons.

The best thing about Callaway clubs is that you do at least know what you are getting when you buy them. You know that they will offer consistency with your shots, and there will be a tendency for them to try to help you.

However, you need to be aware of just how forgiving they are as this is dependent on the series you buy. Checking out the details before spending money is the best solution.

Considering they started off with golf balls, Titleist also produce a number of pretty good irons. However, they are a bit different to the other two brands in that they are known more for their performance and the feel they give as opposed to hitting huge distances.

But here’s where there is a problem.

People think that you always need to hit long distances. People think you need faster ball speeds, and Titleist irons fail to offer either of those. That means people will look past them as an option, and that’s not a cool thing to do.

But that’s not to say that Titleist doesn’t cover every aspect. They most certainly do, but they have decided to focus primarily on other areas apart from distance.

To show what we mean, we can check out the T-series of irons.

With the T-series, you have different versions that are all capable of focusing on different things.

With the T100 series, you are looking at these irons being more for the low handicapper. That’s because they are more of the tour-level irons, so it gives you more flexibility with your shot, but you need to be able to handle the control aspect to gain from them.

With the T200 series, then they push out the distance and reduce the control, to a certain extent. This is going to be ideal for anybody who is lacking in power and yet still wants to have some control over the shot they play.

Finally, there’s the T300 series. These irons are all about being very forgiving with your shot. They are going to be more for the high handicapper who is struggling to hit the ball down the fairway.

Just in this series alone, you get to see the variety of options that are being covered by Titleist. It does mean you should not have to miss out just because you are lacking in a certain part of your game.

Who are Titleist Irons for?

As Titleist goes more for the actual performance over distance, it does mean that if you are currently struggling with your swing speed or power, then this may not be the brand for you. Instead, we would advise looking at either Callaway or TaylorMade if you want to add some yardage onto your shots.

However, if you are quite content with the distance you get, then Titleist irons could very well be the perfect match.

This is all because of their overall approach to developing irons. However, as we just showed, there’s no reason for you to feel excluded, it’s just a case of you needing to search a little bit deeper to find the best irons for your game with Titleist.

As with Callaway, there are various pros and cons to check out when it comes to Titleist irons.

At least with Titleist you are getting something a bit different from other clubs since they don’t have this desire to have you hitting the ball crazy distances.

With Titleist, you are going to be given the opportunity to really work on other aspects of your game, and that’s something that most players need. Overall, they perform well, and they do what you ask of them.

TaylorMade have only been producing clubs since 1979, and even then it all began with a driver. However, they quickly built a stellar reputation for irons alongside drivers and woods.

When it comes to their irons, then what you get from them is going to depend on how old the irons are that you buy. This is due to ways in which they have changed the technology over time.

With new irons, they have focused more on lowering the amount of spin you can generate from the club face, but they have also increased the ball speed. What that means is you are going to get better distances, and that’s pretty good if you produce a lower swing speed than most.

Look at the M6 irons set as a prime example. It used to be the case that the older M-series of irons dealt with spin and precision. Now with the M6, you are going to get irons that are not only extremely forgiving, but go for some serious distance.

Who are TaylorMade Irons for?

One of the best things about TaylorMade is that their irons cover the entire spectrum of players. On the expensive end, and some can cost a lot of money, you do have tour-level irons that focus primarily on giving you the opportunity to work on completely controlling your shot.

At the other end, irons such as the M6 series are designed to help you out, and boy do they do that.

The key when selecting TaylorMade irons is to look at their main components. Keep an eye out for these sorts of things.

All of these questions allow you to determine if the irons you are looking at fit in with what your game needs.

As like before, there are different pros and cons with these irons.

TaylorMade has been able to turn itself into one of the main brands in a relatively short period of time. Their irons are balanced, tend to give off a great feel and sound, and they are so full of technology that you will experience a real difference to your game.

Trying to answer this question isn’t easy. After all, so much of it comes down to your own individual game and preferences.

The one thing we can say is that any of the three brands are more than capable of providing you with amazing irons that will boost your game. However, you need to be aware that they do have a tendency to over complicate things for new players, so care must be taken as to the models you are looking at.

In saying that, at least you know you will be picking up a wonderful club no matter which brand you go for. But with so many options out there across the three names, you are strongly advised to take some time deciding on the irons that you may wish to add to your bag.

In general, they all make amazing clubs. However, if you don’t have an issue with distance, then Titleist could very well be an option.

Of course, if you find that you don’t generate enough ball speed resulting in a poorer distance, then something along the lines of the Callaway Apex set could save the day.

But let’s round things off with a few scores to compare.

Overall, it’s close like we said, but at least now you will have a better idea of what to look out for when adding new irons to your bag. 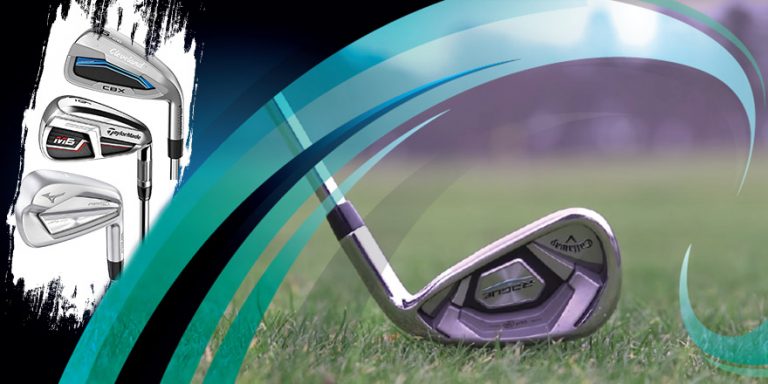 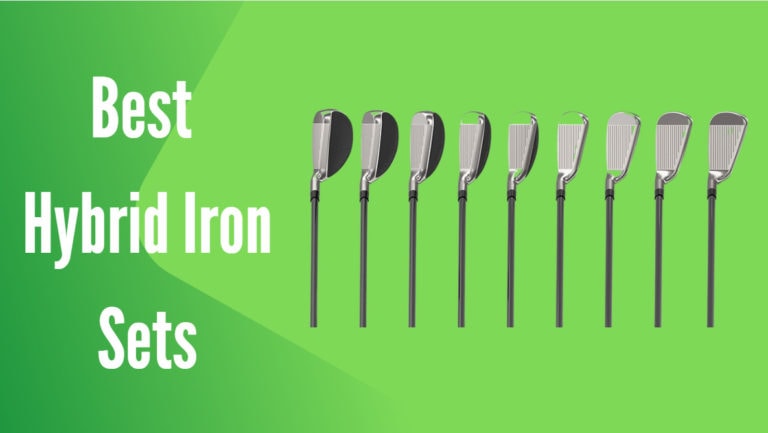 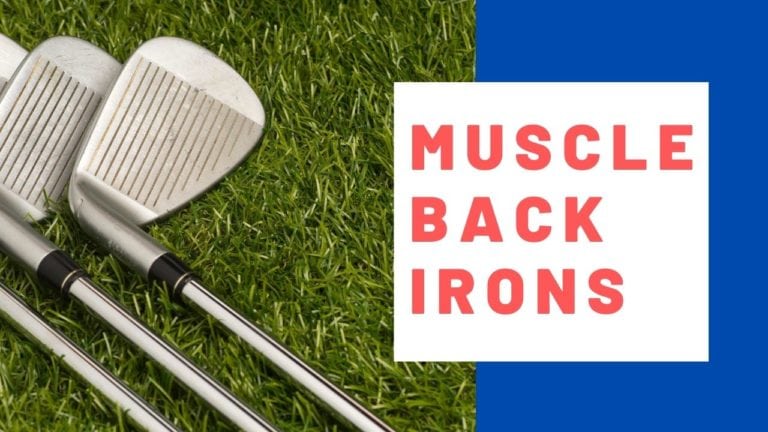 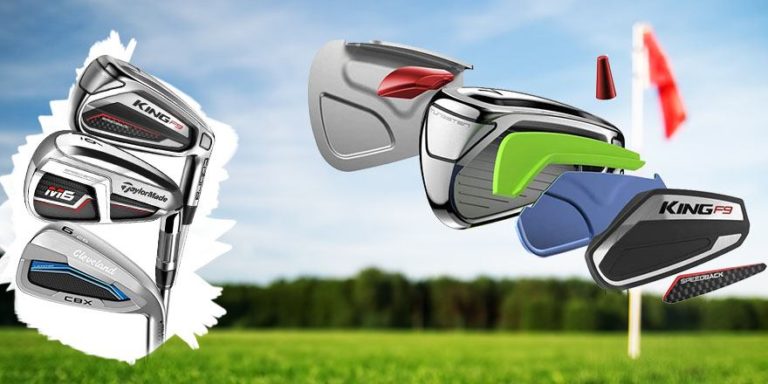