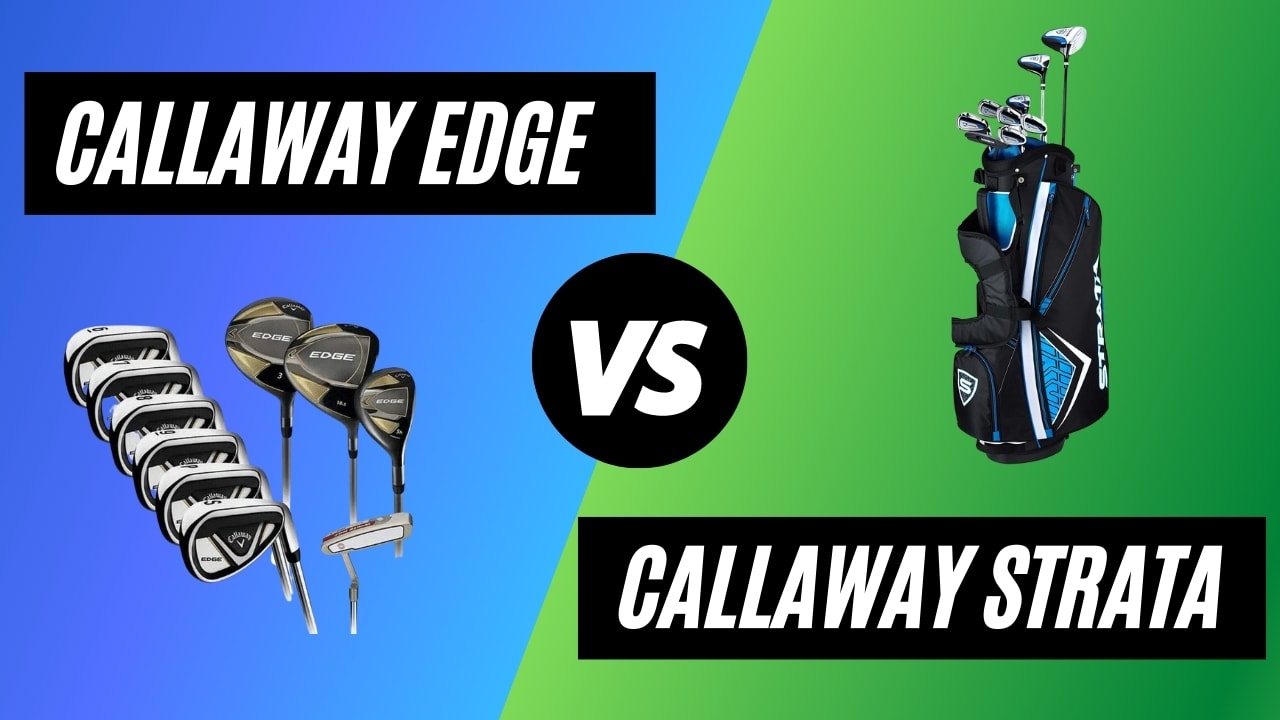 When it comes to quality clubs, then Callaway has to be one of those names that most people are going to think about. The problem is that you do have so many options available, that knowing which one to go for is not easy.

In this instance, we are going to look at two key options and compare them. That means checking out the Callaway Edge against the Callaway Strata.

Now, we will discuss why one is perhaps better than the other later on. But as of right now, we will look more closely at each one individually, and we start with the Callaway Edge set. 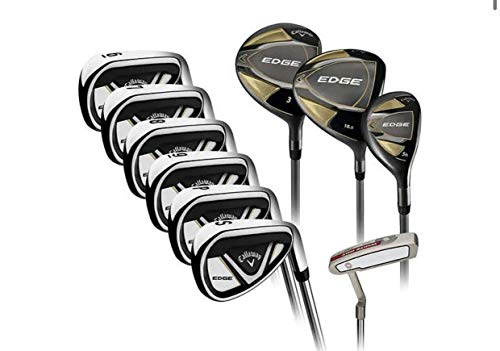 First, we can look at the Callaway Edge set, and this is a set that has been popular for high to mid handicap players for some time with it easy to understand why.

At the heart of what this set does is it focuses on being forgiving to the player. This comes with a huge sweet spot across the set, so you can have a mishit, and the club is not going to crucify you for that mistake.

This is obviously important to high handicap players, as the set allows you to focus on honing your game without stressing too much about that connection. 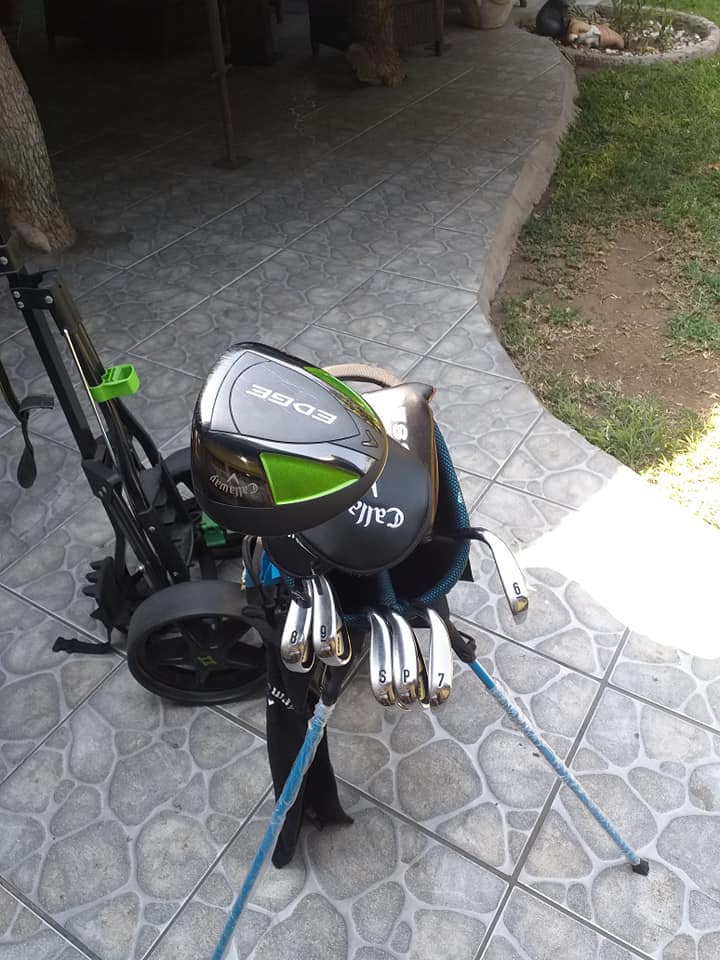 So in this set you are going to get the following clubs, and as you will see, everything is pretty much covered. The set includes.

That’s quite a good balance of clubs, and it should give you ample opportunity to be able to work your way around the course without too many problems.

But there’s another huge bonus with this set.

If you just look at the putter, then you have a top of the range putter thrown into the set, and that’s a massive thing. However, let’s look at the performance of the clubs. 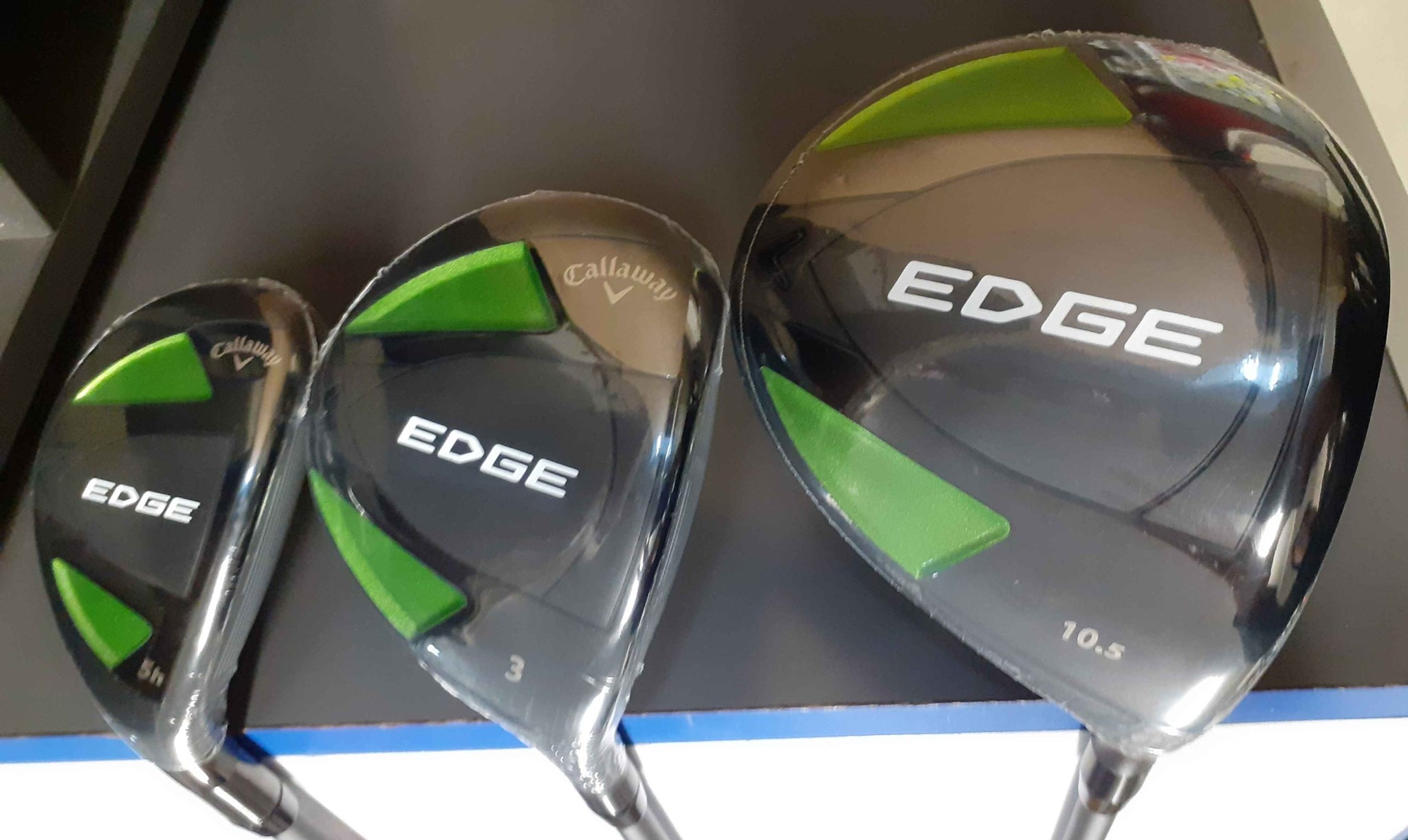 The huge thing here is how forgiving these clubs are, and that is pretty standard across the full range of clubs you get in the set. This also applies even if your swing speed is slow as the Edge range is going to pull your speed up while also allowing for those mishits.

What Callaway has done here is to move the weight in the club face to make sure that you can get the ball off the deck without a struggle. This is a great thing considering who the clubs are aimed at, and even the 3 wood has perimeter weighting that will push the ball up into the air with ease.

With the driver and 3 wood, you get graphite shafts, so they are light and will swing through the air without too much holding it back.

Moving onto the hybrid club in the set, and it’s going to slip into place instead of your 5 iron. It too is highly forgiving, which is certainly a theme across the set, and it’s also quite a compact club. If you want to use something to just get you onto the fairway off the tee, and are struggling with your driver, then this could be the answer.

But looking at the set as a whole, what you get here is a set that is balanced, performs admirably well, and is going to help get you around the course without too much fuss.

The Edge set covers the basics without too much flair, but considering who it’s aimed at, then this will not be a problem. 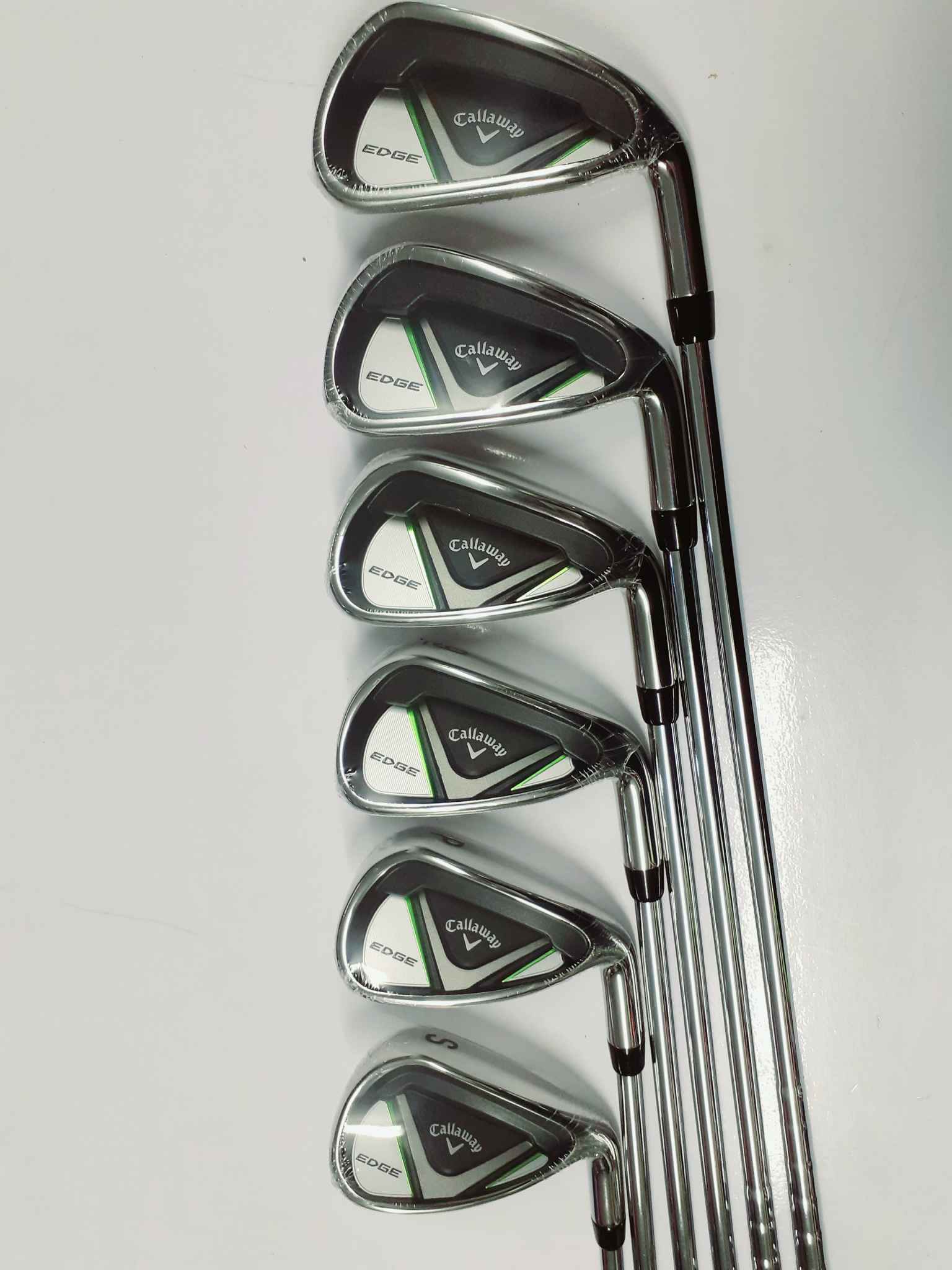 The Callaway Edge is an amazing set that is designed for both mid and high handicap players. It has a selection of really nice clubs in the mix, and the putter and driver are real highlights.

Considering the price you can pay, it does work out to be quite a good deal, and if you are moving on with your game to the point where you aren’t worrying about your swing quite so much, then this set may be perfect for you. 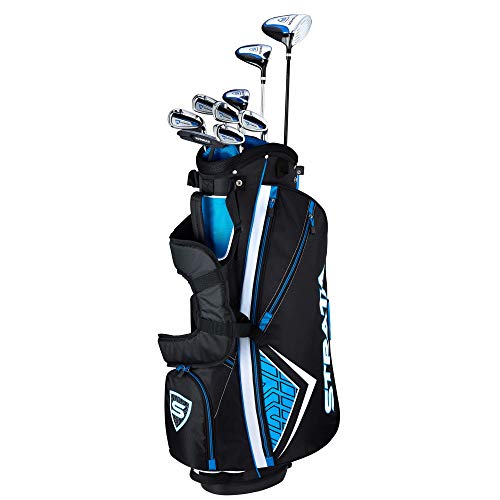 Moving onto the Callaway Strata set, and this is the set that is primarily aimed at those starting out. The fact it comes in at a budget price is a huge bonus as it means you can take advantage of the technology that comes with a Callaway set without breaking the bank. 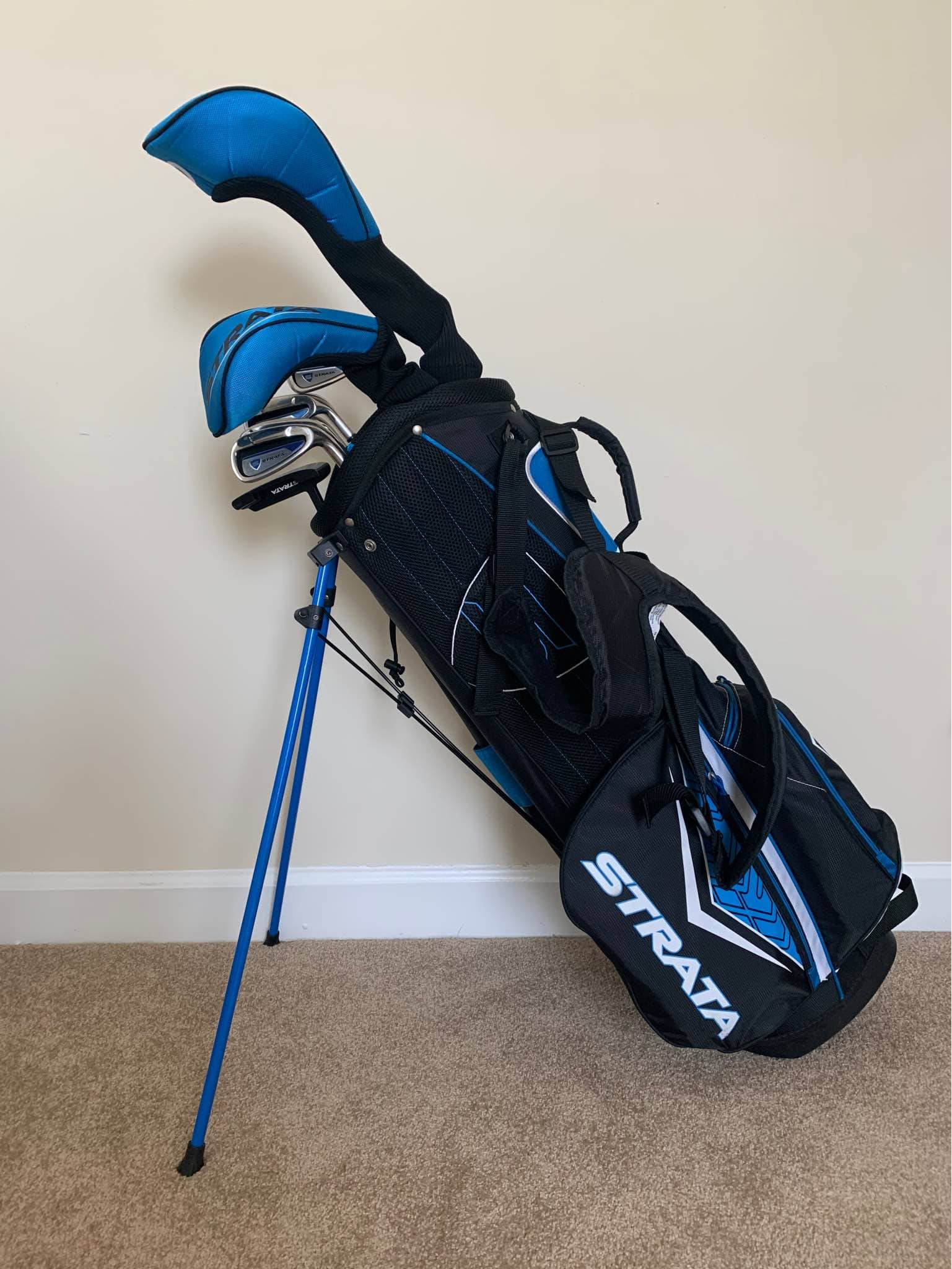 With the Strata, you tend to get the following clubs which does mean every possibility is covered for the individual just starting out on their golfing journey.

As you can see, the set is more condensed than you will get with the Callaway Edge. There’s no sand wedge included, and the putter is more of a basic version than you get in the Edge. However, this is then reflected in the price you pay as there is a real difference between the two sets, and this is one of the reasons why. 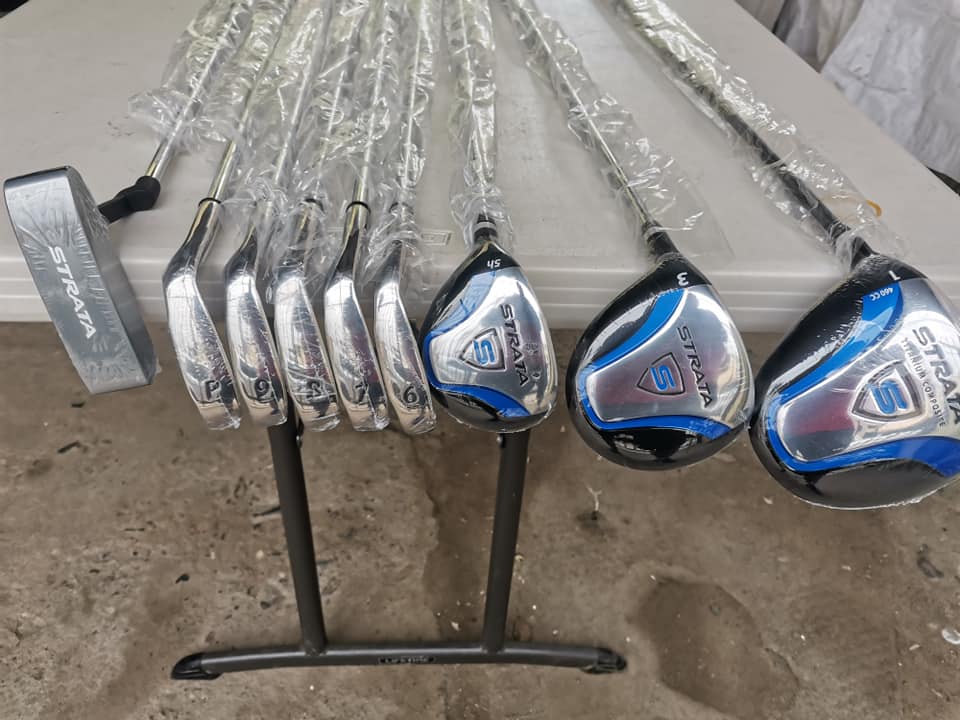 With the Strata set, you do get golf clubs that are stripped down to the basics, but remember that the basics with Callaway remain substantially higher than you get with other brands. So, that’s not a bad thing at all.

As it’s focusing on the beginner, it does mean you are going to have a set of clubs that will be perfect at getting the ball up off the ground, while the clubs are very forgiving.

The sweet spot on the face is huge, and it’s all thanks to the COG being perfectly positioned to help you out with those mishits that you will inevitably have. This large sweet spot is found across the entire set.

The clubs also have an ability to pull your shot straight again, and considering you are probably having difficulty with your drive at this point, then that’s huge.

Callaway has sought to make it as easy as possible for you to hit the ball with this set. They tend to use perimeter weighting, especially on the irons, to boost accuracy with this making a real difference.

And then there’s the putter.

The putter goes big on having alignment aids built into it, so you shouldn’t have too many problems when it comes to hitting your spot on the green. It feels balanced and is undoubtedly there to help with your putting game.

Overall, the performance of these clubs is clearly designed to help people starting out. The clubs pull your shots straight, they are very forgiving, and they will make playing a round an absolute pleasure.

Also, they will allow you to feel as if you are making progress with your game thanks to the way in which they help reduce your score. 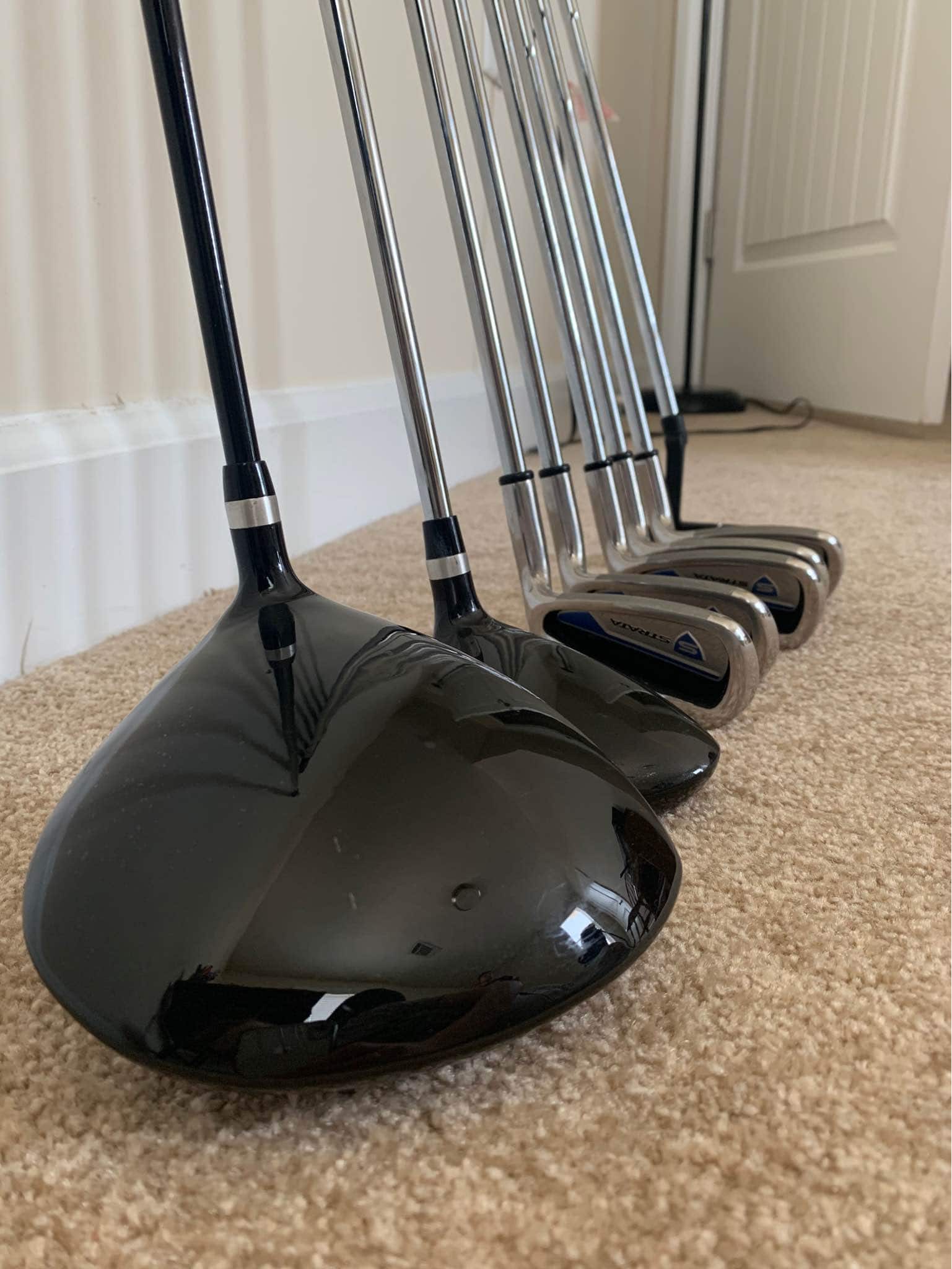 The thing you need to keep in mind with the Callaway Strata set is that it is meant to be basic and to focus on the fundamentals of the game. That’s why it does deal with being very forgiving, and helping you to just get the ball airborne. It’s designed to allow you to focus on developing other parts of your game without stressing about your swing.

It does all of this exceptionally well, and as a beginner it’s going to be the case that this set will not let you down.

Choosing Between the Edge and Strata Set

As you can see, both the Edge and Strata sets have very specific ideas in mind when it comes to getting you on the course. However, knowing where your own game is at will help you to decide between these two sets.

If you are really just starting out, then the fact you can get a Callaway set for next to nothing, and also something that will help make the game that bit easier, is really amazing.

So, this is what we really recommend.

If you are completely new at golf and are looking for your very first set, then the Strata is going to win hands down. It doesn’t do anything complicated and is purely designed to make the game feel enjoyable rather than a struggle.

It helps you with all of the basics. It makes it easier to get some sort of a connection on the ball. It helps pull you back from the edges of the course by being highly forgiving throughout the entire set. It also gives you such a large sweet spot on the clubs that it makes it difficult to really make a hash of things.

However, if you are slightly more experienced, then the Edge set is going to last you that little bit longer. Actually, some people that have stepped away from the game for some time have even been known to drop back into golf with the Edge set simply because of what it offers you.

With this set, you have that little bit more control over your shots and what you want to do. It will still help people starting out, but it’s more towards those people with handicaps that are starting to come down.

It really is down to your game, and your pocket, as to which option you go for. Both are good at what they do, and compared to other sets neither of them are that expensive.

So, Which One is Best?

Finally, let’s look at which set is the best between the Callaway Edge and the Callaway Strata. To be honest, it’s a tough call.

Both are going to be suitable for high handicap players, but the Strata does win in this area as it’s aimed more specifically at that group. The Edge is moving more toward the high down to mid handicap, so that does mean they have opened themselves up to more potential customers.

But there are other things to look out for, so the best way is to score each one to see which comes out on top.

As you can see, it’s a pretty close thing, but considering the market that they are both aiming at, then it’s reasonable to say that the Callaway Strata set should win thanks to the way in which it is so forgiving.

Considering people that buy these sets are mainly going to be either starting out on their golf journey, or struggling to make headway, then a set that helps you out by effectively allowing you to have mishits is a good idea.

Also, when you think about the price, then to get what is effectively a starter set from a top brand such as Callaway for such a low price is wonderful. It’s no wonder that people would then fall in love with the game as a direct result.

But to be honest, either set will be a good idea. Either set will make being out on the course an absolute joy, and as soon as you see your scores starting to tumble, then you will be glad you went for either of these sets. 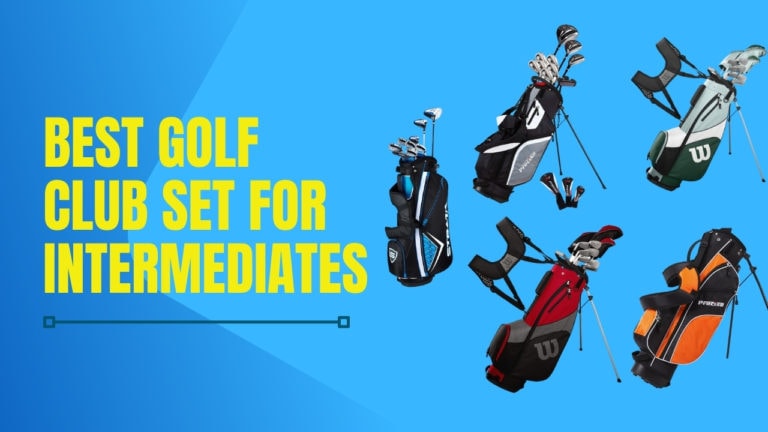 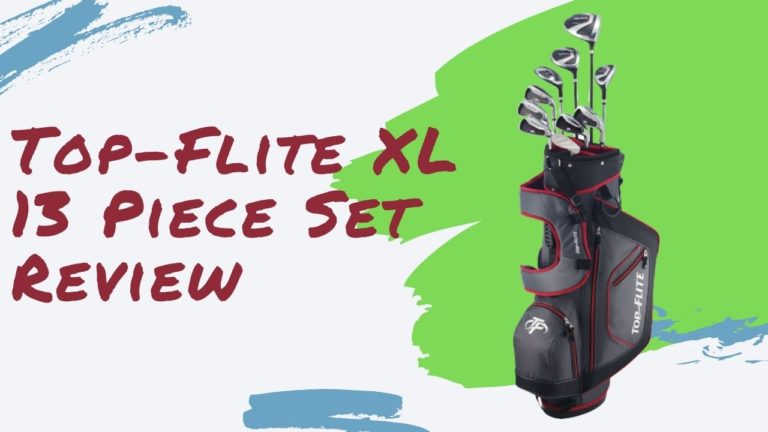 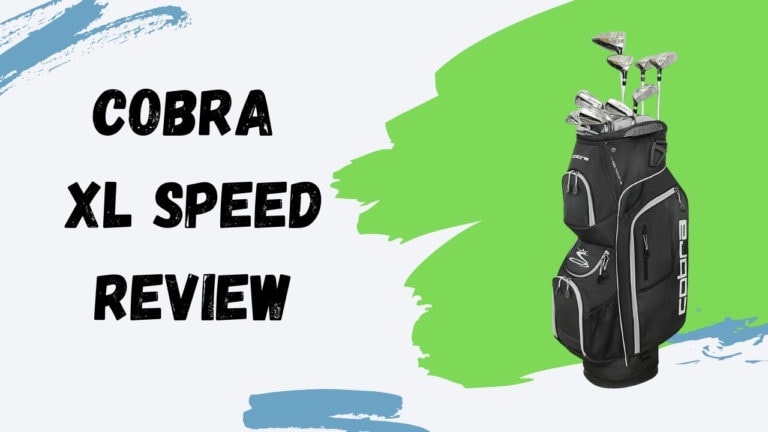 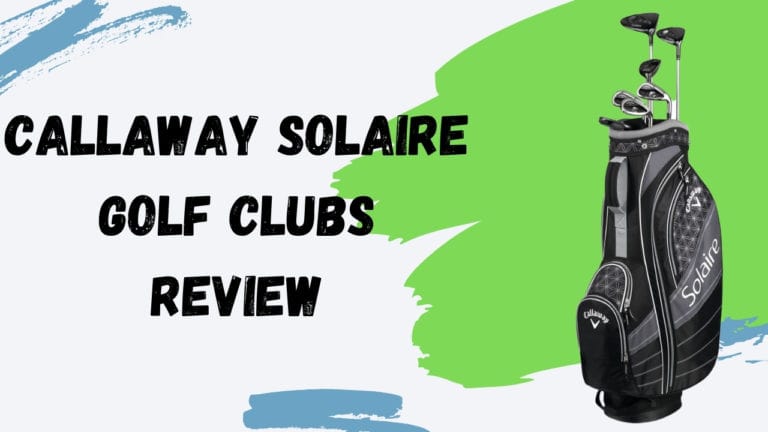 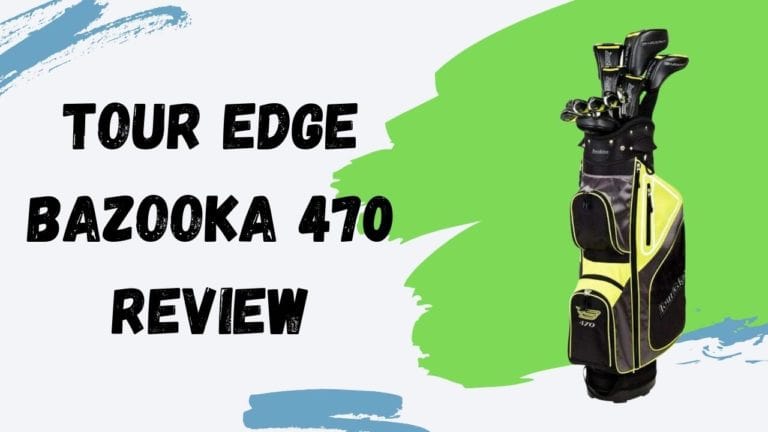 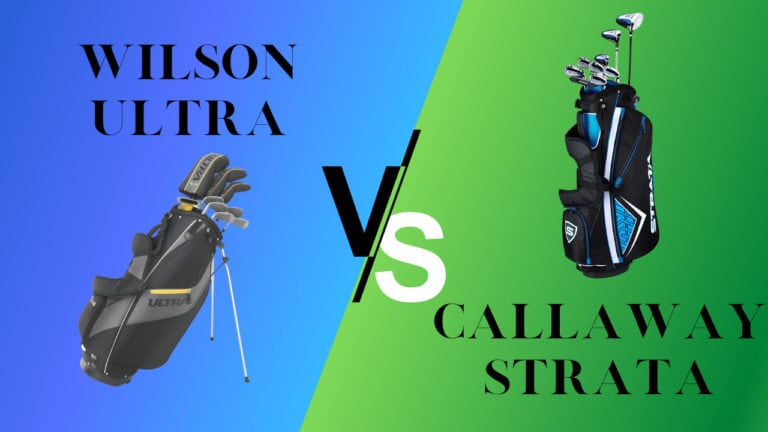