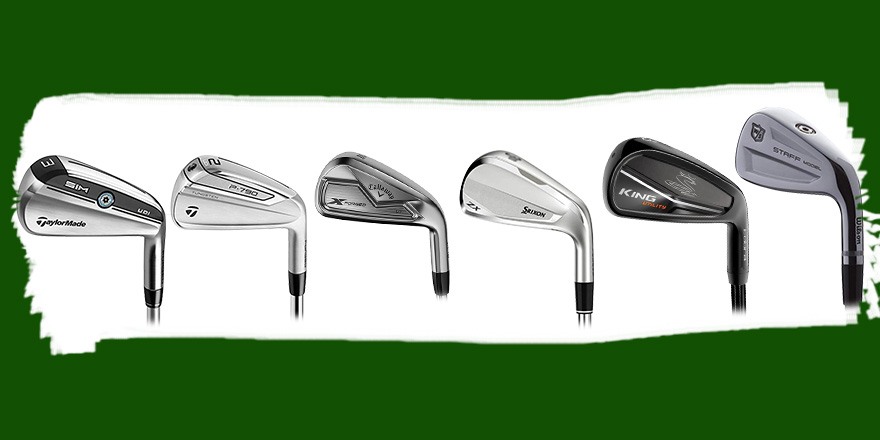 If you’ve been in the game of golf, then you may already know how difficult it is to hit long irons. But then, at the same time, do you also know about the best 2 irons? These are called driving irons by the way, in case you’re a beginner. And what they do is produce a more penetrating ball flight while also boosting the workability associated with irons.

They are certainly more forgiving now, thus easier to hit in comparison to the blades that were designed in the past. On top of that, you get a higher level of accuracy than when using fairway woods and hybrids, despite windy weather conditions.

So let’s find out the topmost choices in the driving irons category.

What Is A 2-Iron Golf Club?

Also known as utility or driving irons, 2-irons came about way before the invention of hybrid golf clubs. They were specifically designed as a combination of a substitute for difficult-to-hit long irons (i.e. a hybrid) and a traditional iron.

Although, with utility irons, the distance achieved may not be as long as that hit by hybrids. BUT you surely get additional control. All because of the iron-like structure!

Driving irons of today and hybrids feature the same type of technologies, unlike before when the former wasn’t as technologically advanced. Due to which they’re becoming more and more popular among pro-level golfers.

Should You Use A 2-Iron?

Well, that depends on your golf handicap level. If you’ve been struggling with factors like distance and speed, then a 2-iron isn’t made for you. More often than not, unless they rank as driving or utility irons as well, 2-irons don’t offer the optimal amount of forgiveness. And this means they don’t travel as far.

Plus, these irons also have a greater mass in comparison to traditional long irons. So, comparatively speaking here, more forgiveness is indeed a part of the experience but it comes at the expense of jeopardizing control. In that case, if your swing speed is slower, choose hybrids as they have a much higher level of forgiveness. 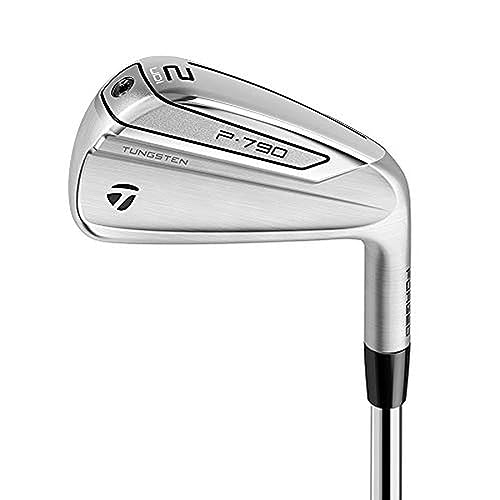 There are just very few driving irons that are as easy and forgiving to hit as TaylorMade P790 UDI. It may appear to be intimidating, no doubt about that. Even more so if you’re a scratch golfer with an average swing speed. But then hitting off the tee and also tight lies is both surprisingly easy and fun.

Even those with a high golf handicap appreciate the construction of this one as it helps in lowering the handicap level. The utility club can produce a distance of as much as 240 yards off that tee. Plus, it goes straight and also spins less in comparison to a hybrid. 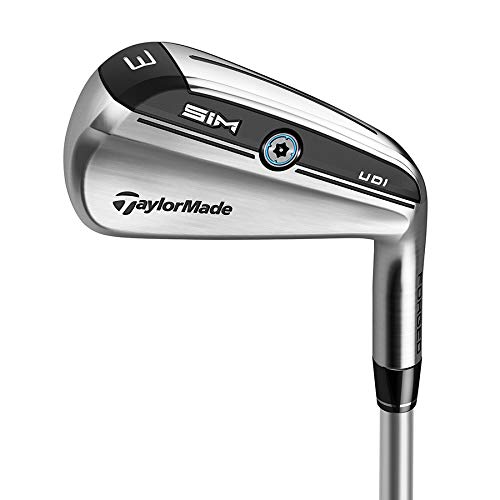 Those struggling with controlling the driver (for women, here’s the solution) certainly benefit from using a 2-iron like the TaylorMade SIM UDI. Once again, the brand delivers a very forgiving golf club that corrects every low-face shot you’re most likely to hit. And that’s all because of TaylorMade’s special  Speed Pocket engineering and its most flexible nature.

Moreover, the grip the #2-iron is outfitted with is one that’s destined to last for plenty of years. On top of that, there’s the flexible, lightweight graphite shaft, which, once again, is a quality more suited for golfers with a slower swing speed (beginners, high handicappers, etc.) 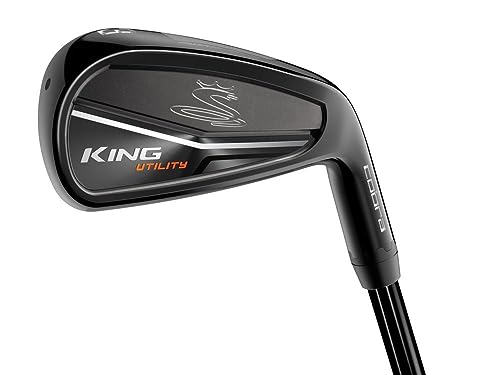 Be as uncomfortable as you might actually be with your hybrids, woods, or driver because now you can replace those with this utility iron that also delivers more distance. Cobra here has designed a 2-iron that’s not just reserved for pro-level golfers. This King Utility Iron is incredibly easy to hit, which should make it seem less intimidating for sure.

Furthermore, tungsten weighting is involved in getting the CG placement to produce more precision and distance.

And let’s not forget about Cobra’s exclusive and phenomenal My Fly 8 technology. This particular feature consists of 8 different yet easily adjustable loft settings for optimal launch angle, spin, and forgiveness. So it’s most likely to become a part of your golf bag as a permanent club. 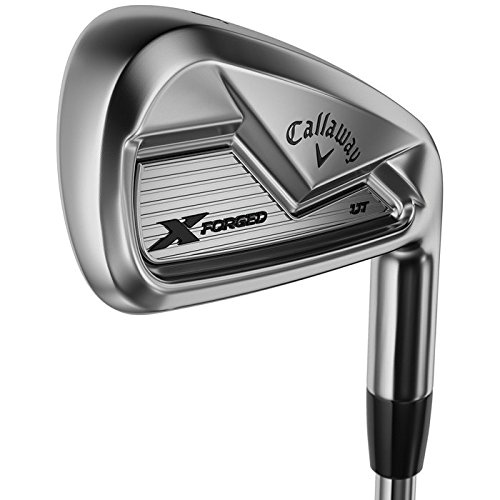 Here’s a Tour-inspired utility iron that promises versatility and performance, and even makes good on that promise. The triple X Forged design delivers a combination of optimal performance, feel, control, and turf interaction. And this is a proven combination that also produces straighter shots the most effortlessly.

Callaway’s well-engineered 360 Face Cup takes care of those mis-hits that often compromise achieving maximum distances. Isn’t this great news if you’re a beginner or someone who simply struggles with hitting the dead-center of the club? 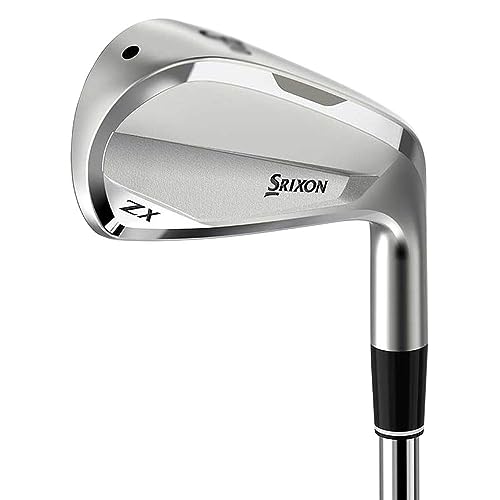 Factors like launch, speed, distance, and feel are crucial when it comes to choosing golf clubs. In the case of utility irons, the best combination includes a higher launch, more speed and distance, and a very soft feel. Just the kind of inevitable results you get from the Srixon ZX Utility Iron.

Be it for your long approach shots, tight fairway lies, or windy weather, this particular utility club makes it all much easier.

You might also like to know that Tour-level golfers place their complete trust in its added control and forgiveness. So you don’t have to think twice before replacing your difficult-to-hit long irons with this more blade-like, more compact substitute. 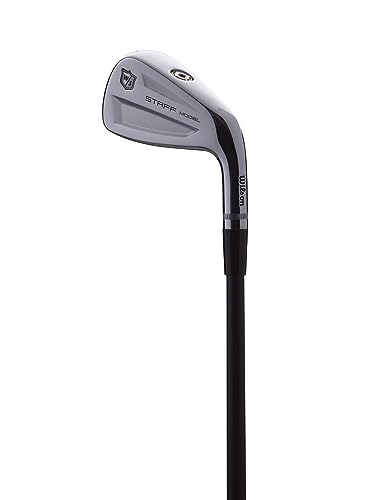 Would you replace your hybrids or fairway woods with this utility iron by Wilson? What if we told you that this Staff Model is comparatively easier to play? And that it boosts confidence levels, so you can achieve more precision?

No doubt that Wilson here is targeting Tour-level golfers with its Staff Model Utility Iron. Because this is actually a very playable and forgiving long iron that optimizes launch angle. Plus, immediate feedback is always great news, whether you touch the golf ball or you don’t.

And we’d like to mention one more widely known fact. That Wilson is a brand that doesn’t pop up as often as brands like TaylorMade, Callaway, etc. BUT that doesn’t necessarily mean it’s a dismissible option in any way. Particularly when the results are favorable!

Because of the small head, hitting a 2-iron is indeed very difficult. But then that doesn’t mean there’s no right approach you can keep in mind for more success.

The ball should be placed ahead in the stance. And around 2 inches to the left heel if you’re right-handed (or vice versa), inside the stance of course.

Why this matters so much is because the right attack angle should be established to give the clubface enough time for squaring up through the impact zone.

Proper posture for longer golf clubs consists of an athletic stance. The aim here is to be able to turn the shoulders effectively for hitting good shots consistently with the 2-iron. Just take the stance that boxers use when in the boxing ring.

Don’t make the common mistake of hitting the ball excessively hard. Agreed that you have to produce a strong, positive golf swing. But the movement should also be well-balanced and rhythmic in order to make the clubhead and your body function in sync for maximizing accuracy and distance.

So how do you generate a balanced, rhythmic swing? Practice as much as you can with your golf club upside down. This has proven to be a very useful drill that compels your hip and shoulder muscles to work smoothly across the back and through golf swing motion.

How Far to Hit A 2-Iron? (Average 2-Iron Distance)

To be honest, 2-irons are difficult to hit merely because of two reasons – the long shaft length and low loft. But then it’s easier if you’re a golfing God. And if you are, then you should be generating a distance of 10 yards less from one iron to the next (in ascending order). Meaning if the distance covered with your 5-iron is 170 yards, then that of a 6-iron should be 160 yards.

The loft angle of 2-irons, for the most part at least, is 20 degrees (much like a 3 hybrid or 5 wood). Obviously, this isn’t set in stone. You can adjust the loft if the iron has a forged design or is adjustable.

What Is the Difference Between 2-Iron and Hybrid?

Long iron substitutes that are easier to hit are known as hybrids. So it only makes sense for golfers like seniors, beginners, slow-swing golfers, etc. to replace their long irons with hybrids. The latter, no doubt, is outfitted with features that get the ball airborne with the utmost ease.

On the other hand, there are more experienced players with a faster swing speed. And they have the ability to compress the ball more effortlessly. In that case, choosing a 2-iron is a more practical and logical choice here.

What Is the Difference Between 2-Iron and 3-Wood?

The common ground consists of both golf clubs being the go-to off-the-tee option. That’s the only thing they have in common.

As for the differences, 3-woods have a loft of 15 degrees while 2-irons are built with a 19-degree loft. The former is relatively easier to hit because of the large profile and sweet spot. So they get the golf ball airborne more easily while also generating longer distances than the latter.

What Is the Difference Between 2-Iron and 3-Iron?

More often than not, golf iron sets start with 3-irons, which means that 2-irons rank as the extra long iron in the set. But the profile of a 2-iron is pretty much the same as that of a 3-iron, with a lower loft of course.

But then there are plenty of 2-irons (also known as utility or driving irons) that are designed with a larger profile, more flexible and lightweight graphite shaft, and added forgiveness. 3-irons, not a single one, feature these kinds of beneficial traits.

What Is the Difference Between 2-Iron and Driver?

Needless to say, drivers belong to a whole new category of golf clubs altogether. They are equipped with a large, bulky clubhead with plenty of adjustability for optimizing accuracy and distance that work off the tee.

As for 2-irons, these you can use from the fairway, tee, and rough.

When to Use 2-Irons?

Pro-level golfers use 2-irons for achieving the desired trajectory and accuracy. These irons keep the ball low in windy weather. They reduce spin to not only have a favorable impact on the trajectory of the ball as it’s flying through the air but also to ensure maximum control and accuracy.

They are versatile, no doubt. And they are also designed for professional play. But then there are 2-irons that are also driving or utility irons that are built with added forgiveness to maximize distance and control.

Golf clubs that suit your swing speed, handicap level, style of play, etc. are the only ones that should be included. So choose your driving irons based on such important factors. Because there’s no sense in trying to mimic the Tiger stinger when you just haven’t yet developed those kinds of skills.

Carolyn Heller’s highly resourceful blog, Golf Depends, could easily become your go-to platform for the most authentic, practical golf-related content. It’s where you begin to appreciate the sport and learn how to improve your game with more positive results and less frustration. [View all posts by Carolyn Heller.]